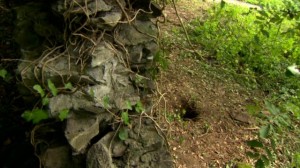 A UVF guns and ammo haul was found by a metal detector buff who thought he’d struck gold.

The man was out searching for old coins and metal in the Castlereagh hills last week when his detector screeched into life.

Said a source: “He marked the spot and then dug out the hole because he thought he was onto something.

“But he couldn’t believe his eyes at what he had found – a stash of guns.”

He called in cops who discovered a deep hole dug underground in woodland at Lisnabreeny Walk.

Army technical officers examined the hide and found it contained a total of 16 modern semi-automatic pistols and 800 rounds of ammunition.

Police believe the Eastern European guns had been underground for a number of years.

The weapons are currently going through ballistic tests to see if they have been used in gun attacks.