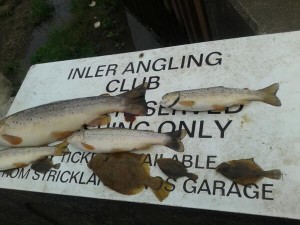 The wild brown trout killed by pollution on the River Enler in Comber, Co Down

ENVIRONMENTAL chiefs have launched a probe over a Co Down river fish kill.

They describe the pollution incident on the River Inler near Comber as “highly severe”.

Officials on the ground – from the DoE and the NI Environment Agency- have visited Martin Hamilton Farms and recovered evidence to build a prosecution file.

In a statement, the DoE said an anonymous tip off was made to its water pollution hotline alerting them to the large fish kill.

An inspection was later carried out by the Northern Ireland Environment Agency.

Local people had been reporting for days a “terrible pong” hanging over the town.