BREAKING NEWS….PSNI MOVE IN OVER TROUBLE IN NORTH BELFAST 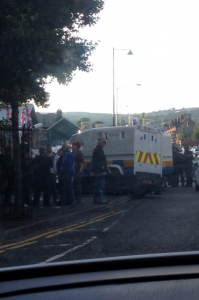 RIOT squad cops were called in over trouble in north Belfast on Thursday night.

It is understood trouble first flared at the rear entrance to Crumlin Road prison off Cliftonpark Avenue.

A bus load of what is believed to be republicans turned up on a pre-planned visit.

A source said: “Loyalists got wind of the visit and mounted a lightning protest.

“Some of the republicans were forced through the protest by police and then the loyalists started fighting with the PSNI.

“There are unconfirmed reports that one male was stabbed at Cliftonpark Avenue.

“Not all the republicans got off the bus so some got trapped while the fighting was going on outside.

“One of those seen on the bus was Eddie ‘Bubble’s Copeland.

“Word obviously got back and more republicans arrived as reinforcements.”

Scores of police land rovers moved into the area to try and prevent the situation spiralling out of control.

“The next we knew there was reports of an attack on the loyalist protest at Twaddell Avenue.

“But it now turns out it wasn’t.

“The loyalists realised the police were thin on the ground and the parade started to make a beeline towards the Crumlin Road.

“When the cops got wind of this, they sent extra police land rovers up to stop getting past the Ardoyne shops.

‘Things are very tense at the moment,” added the source.


23 Responses to BREAKING NEWS….PSNI MOVE IN OVER TROUBLE IN NORTH BELFAST