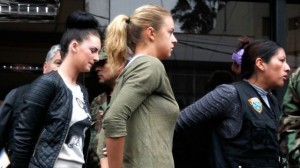 A NORTHERN Ireland woman and her Scottish traveling companion have now been formally charged with drug smuggling.

Michaela McCollum Connolly, 20 from Dungannon, and Melissa Reid, from Glasgow were charged on Tuesday night with trying to smuggle £1.5 million worth of cocaine out of the country.

The charges came after they spent hours in a public prosecutor’s office in Callao, Lima, listening to the police case against them through an interpreter.

The maximum sentence is 15 years in prison but it is likely they will receive a sentence of around eight years.

They are expected to plead not guilty, claiming they were forced at gunpoint to take the drugs back to Spain.

The pair will be moved from police custody to a woman’s prison to await trial which could be up to three years.

The women, both 20, have spent the last two weeks in custody over the drug trafficking allegations.

They were detained at Jorge Chavez airport after a sniffer dog picked up a naroctics scent from their luggage.

On Tuesday afternoon, they arrived at court in Callao handcuffed and spent the night in the cells.

Belfast solicitor Peter Madden, who is advising Ms McCollum, lashed out at the conditions they were being detained in.

He said they had not been on Tuesday and her brother Sean was not allowed to see her.

Police would only allow Mr Madde and a priest in to visit her.

“The conditions inside the holding cells are pretty grim,” said Peter Madden

“They are expected to lie on the floor, there’s a sort of a sponge-type bed which is just not acceptable. There are no blankets, it’s not clean.

“And the most important thing is they haven’t actually been offered any food today and it doesn’t look as though they are going to be.”