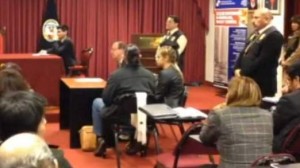 AFTER two weeks in a police holding compound, Michaela McCollum Connolly and Melissa Reid have appeared in court in Lima on Wednesday evening.

The pair are being charged over a plot to smuggle cocaine worth £1.5 million out of the country.

According to SkyNews who are at the public hearing in front of a senior judge and the district prosecutor, the women were told they were being charged with the “promotion of drug trafficking”.

The pair were told it would be unlikely they would be granted bail.

It could also take three years for their trial to get underway should they plead not guilty.

Michaela McCollum Connolly, 20, from Dungannon, and Melissa Reid, 20, from Glasgow, were arrested on August 6 after a sniffer dog picked up the scent of drugs in their luggage as they passed through Jorge Chavez International airport in Lima while en route to Madrid in Spain.

However, they have protested their innocence, saying they were forced at gunpoint by a Columbian drug gang to carry the cocaine in their luggage.

Peruvian officials say the women were en route to Madrid and Majorca on August 6 when airport officials discovered almost 12kgs (26lbs) of cocaine hidden inside food packages in their luggage.

They face a prison sentence of between eight and 15 years if convicted.

Earlier on Wedneday, Ms Connolly’s solictior said the conditions they were being held in at the prosecutor’s centre was appalling.

He told MailOnline: “The conditions inside the holding cells are pretty grim.

“They are expected to lie almost on the floor. There is a sort of sponge bed which is not acceptable. It is not clean.

“They have not been offered any food. To me that is unacceptable.”

He added that they a “dirty and cramped cell”, and that he had requested mattresses for them.

He said: “Their mood has changed.”