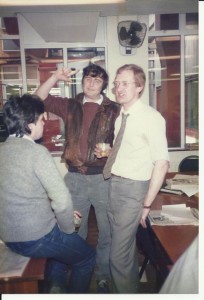 Joe Gorrod centre who has sadly passed away on Sunday

Requiem Mass will be held for Joe this Friday, August 23 at 1 pm in St Malachy’s Catholic Church, Alfred Street, Belfast.

His remains will then be taken afterwards to Roselawn Crematorium.

He cut a dash in Belfast, standing at over 6ft tall, with his winkle picker shoes and his rugged Clint Eastwood looks.

Joe covered all the major events of the Troubles, including Bloody Sunday in Derry.

When it closed on Mothering Sunday, in March 1993, he sent a message to rival Sunday Life editor Martin Lindsay which said: “Sunday News is no more.”

He loved to tell the story of him lying in a hospital bed while working in the Army Pay Corps and sleeping next to him was a ‘Shark Wrestler’.

“The nurses came round this evening and told us if we wanted to go to a dance the next night. Aye, we said,” recalled Joe

“So we put our best uniforms on and the guy in the bed beside me had this band on his arm with the letters ‘SW’.

Joe said that at the dance the nurses fell his friend’s story. But not Joe.

“My CO (Commanding Officer) came in a few days later and I asked him to bring me in a military book on all definitions.

“So he did that and I looked it up….SW. There it was. He wasn’t a shark wrestler at all. SW stood for ‘Shallow Water.

“He was a shallow water diver – picking things like barnacles off the bottom of boats!!!!” cackled Joe.

Joe – or ‘Godrod’ to his friends – was probably the most talented tabloid writer of his generation.

He once wrote a whole story on the back of a cigarette box – only to throw it the window of a car after finishing off his last cigarette.

Joe Gorrod is survived by his wife Eileen and children.