SERIOUS CRAIC IN THE CITY OF CULTURE 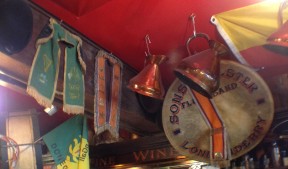 Derry’s City of Culture festival has been a resounding success

THERE is little doubt that the City of Derry being the City of Culture 2013 has been a resounding success.

My former impression of “Stroke city” as it was known was one of a politically and geographically divided city with bitter attitudes and resentment on both sides of the community divide.

Having spent two days there for the Fleadh Cheoil na hÉireann my attitude has changed immensely. In my opinion it is better off than Belfast insofar as attitudes appear to have moved on much further than in the capital city’s.

The people of Derry, and please note here I am calling it Derry for one simple reason, is easier to spell and type, had more of a reason to be bitter as it was the birthplace of the Troubles, but they have moved on and in a monumental way.

Derry is a vibrant, enchanting, and thoroughly fun city, with pubs, clubs, great eating-houses, cinemas, culture, shopping centres and theatres and everything that goes with it.

I always used to wonder why anyone would go to Derry and now I know, because it really is a great place to visit. I popped up to the ‘maiden city’ to see for myself just what the fuss was all about.

Luckily the Fleadh Cheoil or for the non-Irish speakers, a music festival, was in full swing, with thousands of visitors from across the globe enjoying the Craic.

Again my preconceptions of this city kicked in and I expected a wash of non-politically correct “Orishism”, how wrong was I?

This was a cross community event and a City like no other I had seen. It was put together with, by and for the whole community. Rugby, soccer and Gaelic clubs offered their pitches and facilities to provide places to place a tent or somewhere to park a motor home, or get a hot shower, the whole of Derry was involved not just one side of the community.

Ulster Scots pipes played along side Irish pipes, I saw orange sash’s hanging beside AOH sash’s and even a protestant flute band drum cover, given pride of place in what could clearly be considered a Catholic pub. It was truly a remarkable experience and an extraordinary sight. It seems to me, that the people of Derry have embraced the peace process in a far better way than some other sections of the community in this we part of the world.

Rather than drive up to Derry I decided to take the train, simply because I have never taken the train to Derry before, so I decided it was high time I did.

A day return to Derry costs £11.70 from Carrickfergus a distance of over 72 miles. Good value I would have thought, considering the fuel costs for a car would have been in excess of £22-00 each way. Check out www.translink.co.uk.

The service to Derry was just about 2 hours and was very comfortable, and free Wi-Fi on the way. Try doing your email in your car and you can add on an £80-00 ticket and 3 points at least!

On arrival in Derry, I went to the White Horse hotel (http://www.whitehorsehotel.biz), which is located close to the City of Derry Airport.

Without a doubt, a warm reception awaits you at this 4 star Best Western Hotel. Having just completed (April 2013) a major refurbishment of the bedrooms this hotel has just been awarded 4 star status by NITB.

IMG_1222I could not have been happier; well I was, when I discovered I had free wireless Internet access in all areas too!

With just fifty-eight guest bedrooms it’s clear from my stay, that the hotel places an emphasis on personal service and a friendly attention to detail.

The service in the hotel was exceptional. After checking in I grabbed a taxi, using City Cabs www.citycabsderry.com and went into the city to get a feel for what was taking place.

The Fleadh Cheoil na hÉireann was launched with a spectacular opening ceremony in Guildhall Square which was attended by thousands of visitors normally a fleadh opening ceremony has about 500 attendees, this one had 5000!

Great care has been taken to ensure that Derry~Londonderry Fleadh was a cross community event for all the people of Derry.

It was funded by the Department of Culture, Arts and Leisure, Culture Company, Northern Ireland Tourist Board and Foras na Gaeilge.

A core theme to this year’s Fleadh was a Gathering of Traditions.

As 2013 is the year of the Gathering, and with this in mind the organisers had programmed a series of concerts that draw links between nations with significant cultural connections to Ireland, as well as honouring some of the stylistic nuances in Irish traditional music across the country.

From what I saw on Wednesday, Thursday and Friday it has been an overwhelming success.

There were about 15 pop up bars, dances, buskers, talks, side shows, continental markets, concerts, you name it, it was going on.

Even the Police drafted in some Irish-speaking officers to add to the sense of occasion.

The whole city was buzzing and I met many people who just wanted to be there for the “Craic” and no other reason.

After a wonderful walking tour around Derry’s historic walls with the now famous Martin McCrossan http://www.derrycitytours.com/

I was ready for a bite of dinner so it was off to:

Sister restaurant to Browns on Bond Hill, this delightful restaurant opened its doors in May of 2013 and is fast becoming the coolest place to eat in Derry city centre. It serves contemporary fine dining in fashionable city centre surroundings. Situated on the bustling Strand Road, Chef Ian Orr and his team have developed creative combinations to suit all palates and I can assure you, its superb trip advisor comments are richly deserved.(http://brownsrestaurant.com). I had braised shoulder of lamb, simply delightful. Very reasonably priced wine and superb service too.

Thursday night was Cara Dillion’s sell out concert at the Millennium Forum; I was not sure what I was in for because I had never heard her before. I am sure a few of you are looking at this thinking what? But fear not, this Dungiven lass, has got a few new fans. Her singing was breath-taking, I was spellbound and captivated by her awe inspiring music and that of the Irish orchestra and her accompanists. If you didn’t get in you missed a real treat but fear not, her only other date in Ireland this year is the 12th November in Belfast’s Ulster Hall.

Another Great Eatery was Custom House Restaurant,(http://customhouserestaurant.com.Lying in the shadows of Guildhall, Custom House was built in 1876, is a B1 listed building and a momentous landmark within the city of Derry.

After major renovations were completed in 2010, the Custom House Restaurant & Wine Bar opened its doors to the public once again.

With great views of the river Foyle and the new Peace Bridge, the interiors of Custom House have magnificently replicated Victorian finishes giving a nod and a wink to the grandeur of its by-gone era.

The amazing interior is only one element to the Custom House experience. their superb chefs produce uncomplicated and delightful mouth-watering food.

Front of house staff provide a professional yet friendly service ensuring that your dining experience is wonderful.


One Response to SERIOUS CRAIC IN THE CITY OF CULTURE