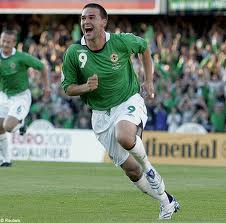 NORTHERN Ireland striker David Healy has been found not guilty of assault on Friday.

The acquittal came after a prosecution witness admitted lying in a bid to tarnish the footballer’s name.

Mr Healy had been accused of attacking a man in Belfast city centre in May last year.

Healy, who scored 34 international goals, was charged with assaulting James Geroid Crossan on May 26, 2012.

His defence solicitor Richard McConkey had always maintained that the footballer denied the charge.

The charge relates to an alleged incident in Chichester Street, Belfast city centre.

Crossan, from North Belfast, alleged to police that Healy had head-butted him, breaking his nose.

Mr Crossan claimed he and some friends had spotted the footballer in the Chichester Street area and his friend asked Healy to pose for a photograph, which he did.

However, Mr Crossan claimed to police that the footballer then approached the group and headbutted Mr Crossan.

Healy, from Castleview Terrace, Killyleagh in Co Down, is currently without a club after finishing last season with Bury.

The 33-year-old former Manchester United and Glasgow Rangers striker, from Killyleagh in County Down, denied the charge.

On Friday, a district judge found him not guilty.

He said the key issue in the case against Healy was “the credibility of one person”.

Speaking outside Belfast Magistrates’ Court, Mr Healy said the past year had been difficult but now felt vindicated.

“I am just glad it is all done and that I can get on with my life,” he said.

“It has been hard when people falsely accuse you of something. Today I have been acquitted and I am delighted.”