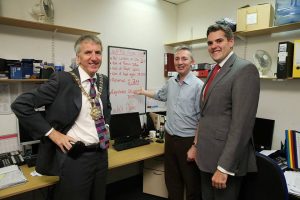 IT ‘S a record breaker….

For Belfast hotels had their busiest ever period during the 10 days of the World Police and Fire Games, it has been revealed on Thursday.

The success of the event in bringing visitors to the city was revealed to Sinn Fein Lord Mayor of Belfast Máirtín Ó Muilleoir and DUP Alderman Gavin Robinson, chairman of Belfast City Council’s Strategic Policy and Resources Committee.

The details were unveiled as they met with staff at Visit Belfast’s Welcome Centre.

Both were there to acknowledge the significant contribution of the team to the success of the event after receiving glowing reports from competitors and their families on the warmth of the welcome and the first class service they had received during their stay.

Chief Executive Gerry Lennon revealed that the total revenue of hotels booked through Visit Belfast amounted to a staggering £1.73 million.

And during the period almost 37,000 bed nights sold.

There was almost 100 per cent occupancy during the period, well above the eight-year August average of 77.7 per cent. .

With 2013 also proving to be a record year for cruises coming to the city – 58 scheduled to arrive this summer – and almost 60 conferences bringing in more than 20,000 delegates, the city continues to punch well above its weight in tourism.

The Lord Mayor said: “The World Police and Fire Games was a huge success in terms of the numbers who came and had a positive experience of Belfast and the boost to the hospitality industry.

“We really knocked it out of the park. We should be proud of what we achieved together.

“I am already attending planning meetings for Giro d’Italia next May but there is so much more to look forward to between now and then.

“This week tens of thousands will enjoy the Tennent’s Vital concerts — and I plan to join them for the Snow Patrol gig tonight.

“Yesterday I launched the Mela Indian festival, now established as a major event on our cultural calendar.

“We must keep our eyes on the prize. And that means working together to send out positive messages about our city and ensuring that when the world media focuses on Belfast, it is for the right reasons.”

Alderman Gavin Robinson said: “Tourism is a key part of the city council’s £150 million investment programme, evidenced by the work now under way at the new Welcome Centre in Donegall Square which will open later this year.

“These figures underline the importance of such an investment as we need to ensure our levels of service and facilities continue to improve in order to maintain the momentum.

“The success of the games underlines the importance of bringing major events to Belfast and our ability to put on a world class show.”