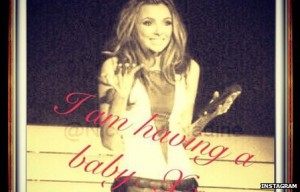 The 28-year-old Derry star revealed the news on Instagram by posting a picture of herself looking surprised with the caption: “I am having a baby. X”

However, no mention is made of who the father is or when the baby is due.

Earlier this year she was pictured with former fiance and American footballer Jason Bell.

The pair dated for three years but announced their one-year engagement had ended in June 2011.

She will be the first Girls Aloud star to have a baby after the band found fame on reality TV show Popstars: The Rivals in 2002.

Her debut album Insatiable was sold exclusively by Tesco in November 2010.

The album went to number 20 in the Irish Album Chart and number 47 in the UK Album Chart.