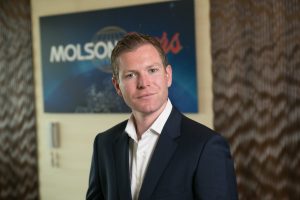 Robert Blythe has been appointed head of marketing for Molson Coors

ROBERT Blythe has been appointed Head of Marketing for Ireland, Scotland and Craft Beer at Molson Coors (UK) Ltd.

Robert, who in his new role will oversee all marketing activity for Molson Coors in Northern Ireland and the Republic of Ireland, joins the company from the Kerry Group where he was Marketing Manager of the Group’s Raw Meat business.

“This is an extraordinarily exciting time for Molson Coors in Northern Ireland and the Republic of Ireland,” commented Mr Blythe.

“Our horizon is firmly set on expansion across the entire brewing sector from our Coors Light and Carling brands, which have been recording phenomenal growth in Northern Ireland, into what I believe to be the category with phenomenal potential, Craft Beer, both in terms of the domestic market and internationally through Molson Coors’ network,” he added.

To date in 2013 Molson Coors has experienced year on year growth in Northern Ireland of 23 per cent in volume and 20 per cent value.

“These figures are all the more impressive against the backdrop of a Northern Ireland lager market that has declined by 9 per cent in volume and 8 per cent in value during the past year.”

As part of its ongoing growth and investment in Ireland, Molson Coors acquired the Franciscan Well Craft Brewery in Cork earlier this year and has already seen its output expand by 220%. The company is also now in the final phase of securing a site in Cork for an expanded Craft Brewery.

Molson Coors Ireland is the country’s fastest growing brewer with a brand portfolio in Northern Ireland that includes beers such as Coors Light, Carling, Grolsch, Cobra, Blue Moon and Corona.

Established in 2009, Molson Coors Ireland has offices in Belfast and Maynooth and its brands now account for over 10% of the overall Irish lager market.