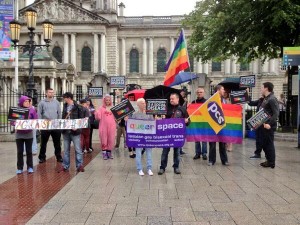 PROTESTORS gathered in Belfast tonight to voice their anger what they see as Russia’s homophobic laws.

The event was held at Belfast City Hall on Wednesday evening just as Northern Ireland played Russia in a recheduled fixture a few miles away in south Belfast.

Campaigners said they held the protest to highlight the injustices being experienced by the gay, lesbian, and transgender community in Russia.

Recently Russia passed a law making it illegal for anyone under the age of 18 to be given material about homosexuality.

As a result, there are now growing calls for next year’s Winter Olympics to be moved from Russia.