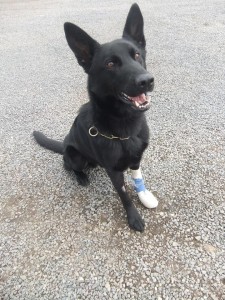 A PSNI public order dog need seven stitches to his left leg after being struck with an iron grating during serious rioting in Belfast city centre on Friday night.

Dark is picture hear with a bandage on his left paw and ankle which took the full force of the impact.

During the same violence, a PSNI officer was knocked unconscious after he was struck on the neck with an iron grating.

The riot squad officer was treated at the scene by paramedics and his neck was put in a brace as a precaution before being taken away for treatment in hospital.

On Monday, a senior PSNI chief has said loyalist protestors opposed to a republican parade in Belfast city centre on Friday evening were intent on violence.

A total of 58 police officers were injured during the trouble in Belfast city centre.