OUR MICHAELA WILL CLEAR HER NAME, SAY FAMILY OF COCAINE TRAFFIC GIRL

THE family of Co Tyrone woman Michaela McCollum Connolly say they are shocked and distressed following her arrest in Peru on suspicion of drug trafficking.

And they say she denies any involvement in the drug racket uncovered by Peruvian police a week ago.

The 20-year-old from Dungannon but was who was living in north Belfast for a time, along with a 19-year-old Scottish woman, are due in court tomorrow, Wednesday, August 14 for the first time.

The pair will be accused of trying to traffick £1.5 million worth of cocaine out of Peru last Tuesday to Spain.

Authorities in Peru earlier released a video of Ms McCollum and Melissa Reid, from 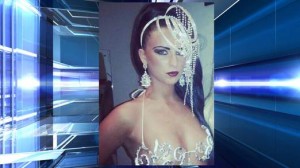 Scotland, who were arrested at Lima’s international airport last week.

The National Police of Peru said it found more than 10.8kg of cocaine, thought to be worth around £1.5 million hidden in food in the luggage of the two women.

The video shows the two women being questioned by authorities.

Both Ms McCollum and Ms Reid answered a number of questions.

Ms McCollum confirmed her name and that she was Irish.

Her family had reported her missing prior to news of her arrest as she had not been in contact with them for a number of days.

She was living in Ibiza, having moved there from Belfast.

Ms Reid, from Lenzie in East Dunbartonshire, said: “I was forced to take these bags in my luggage.”

When asked if she knew they contained drugs, Ms Reid said: “I did not know that.”

Ms Reid also confirmed that they were due to fly on an Air Europa flight to Madrid, and then on to Majorca.

Amnesty International has raised concerns about prison conditions in Peru following the arrests.

The Director of Amnesty International in Ireland Colm O’Gorman described conditions in Peruvian prisons as “poor”.

Meanwhile, an Irish-American bishop who met Ms McCollum and her co-accused at the prison said the women were being treated well.

However, Archbishop Sean Walsh of the Pentecostal Eastern Catholic Church said the women’s chief concerns were for their families because they may be facing long prison sentences.

The Department of Foreign Affairs this afternoon said embassy officials based in Mexico have been in direct contact with Ms McCollum.

A spokesperson said officials are continuing to provide consular assistance to her family in Co Tyrone.

The spokesperson added that Irish embassy officials in Mexico are working with their British counterparts in Lima.


One Response to OUR MICHAELA WILL CLEAR HER NAME, SAY FAMILY OF COCAINE TRAFFIC GIRL