THE union chairman representing rank and file PSNI officers has called for a six month ban on contentious parades.

Terry Spence of the Police Federation made the call following a senior PSNI officer’s assessment that loyalists were intent on violence during Friday night’s protest against a republican parade in Belfast.

Terry Spence said a parades moratorium would allow political representatives to find a solution to the issue.

A total of 56 police officers were injured during the trouble. A number of civilians were also injured, including UUP MLA Michael Copeland along with his wife and daughter.

On a ban on controversial parades, Mr Spence said: “It would give everyone a breathing space so that Richard Haass, the special envoy from the United States, can do his work and it also gives the police service time to consolidate their position.

“What we need is an urgent surge in resources, because it is quite obvious on the basis of what has been happening over the past year that the police service is stretched to the limit.” 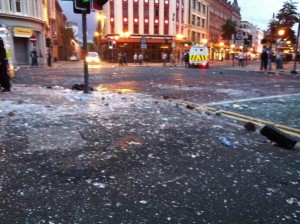