IT’S a baptism of fire for newly promoted Ards as they travel into the lion’s den of champions Cliftonville on Saturday, August 10 (kick off 3 pm).

The Co Down club will be hoping to emanate Ballinamallard who gave a good account of themselves last season during the Danske Bank Irish Premier League championship.

The best they could hope for is a draw against the champions but if the hunger is there Ards could cause the first upset of the new 2013/2014 season at Solitude.

Cliftonville boss Tommy Breslin says his side are not putting any extra pressure on themselves as they bid to retain the Irish Premiership title.

It will be a tall order for any manager.

No Irish League club, except Linfield has won successive championships since Portadown in 1990 and 1991.

Cliftonville were knocked out of the qualifying stages of the Champions League by Celtic.

However, it was an experience his players can certainly learn from.

“I’m happy with where we are and the squad we have so I hope we can carry on from where we left off last season,” Breslin told BBC NI Sport.

“Linfield will want to regain the title but we’ll be doing our utmost to try and hold onto it,” said Breslin.

“Linfield are the biggest club in the land and David Jeffrey is a true competitor so he’ll have his team fired up and will desperately want the Gibson Cup back at Windsor Park.

“We’ve had a decent pre-season so we’ll just go out and enjoy every game and see where it takes us,” added the Reds boss.

The bookies are making Linfield favourites by a short nose for the Premiership title and the Blues have made major changes to their squad in the close season.

The Blues had a poor last season by the club’s own high standards and Jeffrey has shown the door to a few players and brought in new talent to bolster his squad and compete for the league.

In fairness to the Linfield board, they stuck by their manager while on the terraces there was mutterings of ‘Jeffrey out’ as his players under performed. 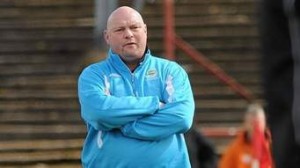 Now it is to his team to prove the board were right to keep their faithful manager at the helm and win back the league.

“The league table showed that Cliftonville were the stand-out side last season, though Crusaders were very good too,” said Blues’ manager David Jeffrey.

“They were quite a bit in front of us so we had to do quite a bit of work during the summer and we’ll see in the next few weeks how far we have got in terms of closing the gap.”

Linfield begin their campaign with a potentially testing trip to Portadown, while Cliftonville entertain newcomers Ards at Solitude.

United midfielder Gavin Taggart begins a two-match suspension while David Cushley is a doubt as he continues his recovery from a punctured lung.