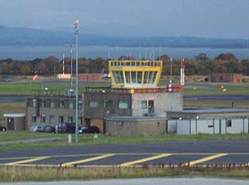 A MALE passenger had to be restrained and handcuffed after causing trouble on a holiday flight home to Belfast.

The incident happened mid-flight as the plane was flying from Turkey to Belfast International Airport.

At 4.45 am on Friday morning, a 20-year-old man from Lurgan, County Armagh, was arrested by waiting police officers when it arrived at Aldergrove, Co Antrim.

Two passengers had to restrain him at 20,000 ft using handcuffs supplied by air hostess staff just 45 minutes into the flight.

Police and a paramedic crew were waiting when the flight landed at Belfast International Airport.

On board, the man was found to be unconscious and was treated by a paramedic team before being taken away by police.

The chartered flight was being operated by Thomas Cook Airlines.

A spokesperson said: “We operate a zero tolerance policy towards any disruptive or aggressive behaviour on board our aircraft which may affect the health, safety and well-being of other passengers and our crew.

“The safety of all passengers and crew is always a priority and Thomas Cook Airlines is compliant with regulations issued by the Civil Aviation Authority.”

The arrested man could face a charge of “air rage” once police finish their inquiries.


One Response to MAN HANDCUFFED MID-FLIGHT FROM TURKEY TO BELFAST