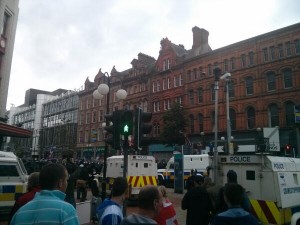 VIOLENCE has erupted on the streets of Belfast City Centre on Friday evening during loyalist protests against a republican rally.

The PSNI have confirmed two police officers have been injured, including a female who had to be treated at the scene by members of the public in Royal Avenue.

Stone and missiles have been thrown at police and media representives.

Water cannon has been moved into the town centre and used on protestors in a bid to remove them from Royal Avenue.

A number of plastic baton rounds have also been fired.

Around 800 walk from the Donegall Road to the rallying point at Royal Avenue.

A smoke bomb was thrown and loyalists at one stage tried to overturn a police land rover as tempers flared.

The republican anti-internment parade could now be re-routed away from Royal Avenue into Donegall Street.

It was stopped at 7.08 pm at the underpass near North Queen Street to prevent it getting any closer to Royal Avenue.

“This has been a recipe for disaster,” said a source.

“The loyalists are refusing to move. It’s a stand off. 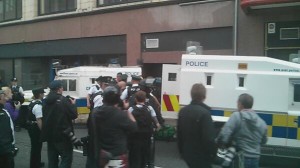 “The situation is extremely volatile. There is a very large crowd, anywhere up to 2,000 protestors and hundreds of police.”

The PSNI’s ‘hawk-eye’ helicopter is hovering over the scene.