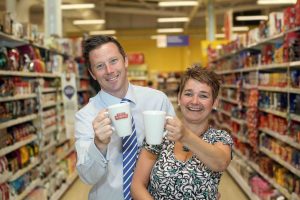 LOCAL tea and coffee company Robert Roberts has secured a deal with Tesco to supply the retail giant with its new Dark Roast ‘Shipyard Strength’ coffee.

The deal will see the product being distributed across 38 Tesco stores province-wide and the Lisburn-based company expects to see annual sales rise by at least 20%.

Following in the tradition of the Robert Roberts’ coffee range which features local landmarks on each of its packs, the new Dark Roast features the iconic Harland and Wolff cranes and is a strength six coffee, a fairly limited coffee option in the Northern Ireland marketplace.

“Robert Roberts coffee has been recognised in Northern Ireland as a quality product and it has been awarded ten Great Taste Awards for 2012/13 so we are delighted to be adding an additional product to the range of coffee we have to offer,” said Joanne.

“The new Dark Roast ‘Shipyard Strength’ coffee is made from the finest Arabica Sumatran beans which is known for its earthly full flavours and will give coffee lovers that full flavoured coffee hit.

“Inspiration for the product name comes from Belfast’s famous shipyard Harland and Wolff which we thought was fitting due to the product being a strength six coffee,” she said. “Our research has shown that using local landmarks on our packaging is a big hit with our customers and we are delighted to show off Northern Ireland through imagery on the packs,” she added.

“Stocking local products is very important in Tesco and we have a team dedicated to buying the best products from Northern Ireland to offer our shoppers,” said Steven.

“The Robert Roberts brand fits this bill perfectly as it is known for its quality so we are only too happy to stock the new coffee in our stores, offering even more local choice for consumers,” Steven.

In addition to the new Dark Roast ‘Shipyard Strength’ coffee, the Robert Roberts coffee range also includes a strength four Morning Roast, a strength three All Day Roast and a strength five After Dinner coffee which are all available in Tesco and other leading retail outlets in Northern Ireland.