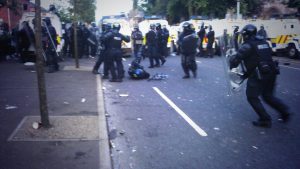 UK police officers drafted in to help support the PSNI should be armed in the future.

That’s the view of Terry Spence, chairman of the Police Federation, the union which represents rank-and-file officers.

The PSNI drafted in ‘mutual aid’ officers for the the G8 summit at Lough Erne, Co Fermanagh, in June.

Hundreds more brought in from England, Wales and Scotland were shipped in by boat during last month’s at times violent loyalist parading season.

A number of those officers were injured, including a female who sustained a broken leg during violence in north Belfast.

Terry Spence said training should be overhauled if officers from England, Scotland or Wales were to be used more frequently.

He told PoliceOracle.com: “We need to have the proper training if officers are going to be deployed more frequently under mutual aid arrangements – and there seems to be an intention that this will be the case.

“While we clearly welcome any assistance, a proper assessment of the situation is required – and this should also involve routinely arming those deploying to Northern Ireland.”

Three hundred officers from England, Scotland and Wales were brought to Northern Ireland in July amid five consecutive nights of violence linked to the loyalist parades dispute which injured more than 70 officers – petrol bombs, masonry and even swords used to attack them.

The reinforcements brought to about 1,300 the number of English, Welsh and Scottish officers who have crossed the Irish Sea since before trouble erupted on July 12 following a banned Orange Order parade in north Belfast.

All officers from Great Britain brought in under mutual aid arrangements have gone home but sectarian tensions remain, with the Sinn Fein Belfast lord mayor attacked and Stormont power-sharing partners the Democratic Unionists and Sinn Fein at loggerheads over a republican march in Castlederg, Co Tyrone, this weekend.

“There must also be a proper training programme for those dealing with public disorder – as we have recently seen, explosives and firearms can be used by troublemakers,” he said.

As well as boosting training, Mr Spence called for a pay package to be devised to reflect the specific demands of Northern Ireland.

His federation argued that remuneration arrangements did not account for restrictions on officers deployed to the province as a result of the threat.

Mr Spence’s view was shared by Rick Nelson, secretary of the Police Federation of England and Wales operational policing sub committee, who agreed that officers should be provided with firearms for their personal protection while on deployment.

He said the G8 training package had been tailored to a specific event and set of circumstances – and the violence experienced during the parading season had been very different.

Mr Nelson added: “Our view is that officers should be provided with the same training and equipment as their colleagues in Northern Ireland – we need to look again at the package.”