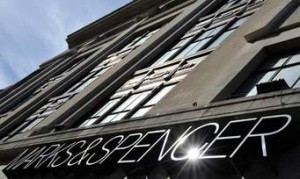 BREAKING NEWS: NORTHERN Ireland has been dealt a massive jobs blow on Wednesday.

Leading clothing and food retailer Marks & Spencer has announced it is to close its warehouse operation in the province.

It means that between 140-180 people will lose their posts from the New Year dealing a heavy blow to the Co Antrim economy.

On Wednesday, Marks & Spencer said it was shutting its warehouse operations on the Hyde Park site at the start of 2014.

The company said its cross-docking and re-pricing operations at the centre will not be affected.

But Marks & Spencer revealed that two thirds of the 355 people who work at the centre will be affected by the closure.

“As a result we have to re-organise our supply network and, as part of that work, we have made a proposal today (Wednesday) to cease the warehouse operation at the Hyde Park distribution centre.

“The cross docking and re-pricing operations are not affected.

“We will now work closely with the operator, DHL, its employees and other stakeholders to discuss the future of the site.

“We understand that it will be an unsettling time for all involved and will do all we can to offer support throughout the process.”

The facility is currently managed and operated by logistics company DHL.

A spokeswoman for DHL Supply Chain added: “As part of its Supply Chain Transformation programme, M&S proposes to make a number of changes to its supply chain infrastructure on its journey to become an international multi-channel retailer.

“With the opening of the new M&S E-commerce National Distribution Centre (EDC NDC) in Castle Donington, a number of its other distribution centres are now being underutilised.

“As a result the company is proposing to reduce its Hyde Park RDC operation to a cross-dock and re-pricing facility.”

She added: “Potentially affected staff have been informed of the situation and will shortly enter into consultation with site representatives to discuss their options.

“Subject to consultation the change to a cross-docking facility will take place in the first half of 2014.

“Both Marks and Spencer and DHL thank the team at Hyde Park for their ongoing dedication and stress that the decision in no way reflects on the quality of work at the site.

“DHL will continue to work closely with Marks and Spencer to mitigate disruption to our colleagues during this difficult time.”