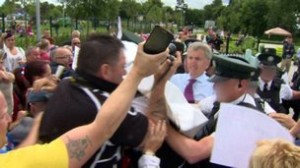 THE Lord Mayor of Belfast, Sinn Fein’s Máirtín Ó Muilleoir was given a rough reception in north Belfast on Tuesday during the re-opening of a play park.

The Sinn Féin councillor had to be treatd in hospital for bruising after he was kicked, punched, and heckled by loyalist protesters at the re-opening of a park in north Belfast.

And so serious was the protest that the police had to escort him from the ceremony at Woodvale after loyalists gathered at the community garden.

It was then that the worst of the ugly scene erupted.

The high-profile businessman and city councillor said he was kicked and punched during the altercation during which there were shouts of “Go home ya republican bastard.”

Police said nine of their officers were injured during the incident, although none required hospital treatment.

The PSNI say it has now launched a full investigation into the incident.

North Belfast commander Inspector Andy Freeburn condemned those responsible for what he branded an “appalling incident”.

“The PSNI will be investigating this appalling incident with a view to identifying those responsible,” he said.

“This should have been a positive day about the opening of a children’s play park in the area.

“But instead was marred by disorder which has left a number of our community officers injured,” added Chief Inspector Freeburn.

Mr O Muilleoir did go to hospital after the incident, where he was treated for bruising and given pain relief medication, but later resumed his official duties.

Community tensions are high in Woodvale after a summer that has already seen serious loyalist rioting over a decision to prevent Orangemen parading past the nearby nationalist Ardoyne area.

Loyalists have accused Sinn Fein of waging a cultural war against their community despite its ‘Shared Future’ campaign.

Mr O Muilleoir accused the protesters of “hijacking” a community event, insisting they were a “small minority” that did not represent the people in the Woodvale/Shankill area.

“When the lord mayor gets invites there must be no ‘no go’ areas in Belfast,” he said.

“I want to be mayor for all the people.

“We just have to keep going building a peace and not be dragged back. I do not think what happened is representative of the people of the Shankill.

“My message for the people who kicked and punched me is: I will not be giving in to violence, or giving in to yesterday’s men.”

The mayor added: “When I became mayor I promised a year of firsts, I didn’t realise I would be the first first citizen to be assaulted.”

Mr O Muilleoir was heckled as he arrived at the event, which was subsequently cut short. The main trouble flared as he left the venue.

The event for the park was then cancelled.

The visit went ahead despite concerns about the Lord Mayor’s visit given recent events over the Twelfth of July.

Five local councillors in the Court area, including former lord mayor Hugh Smyth, wrote to council chiefs last month saying they believed the visit by a Sinn Finn lord mayor would be “totally inappropriate given the current feelings” in the area.

Mr Ó Muilleoir later tweeted that as lord mayor he had promised to visit every part of Belfast, if invited.

He said the police had indicated it was safe, but added that “anti peace elements” would not win.

Woodvale was the scene of recent rioting linked to a 12 July parade.

The Parades Commission ruled that three Orange Order lodges could not make the return journey past Ardoyne shops on Crumlin Road, an interface separating unionist and nationalist communities.

The Parades Commission is the body that adjudicates on contentious parades in Northern Ireland.

The city council and the Department for Social Development have invested a total of £4m to revitalise two community parks in Belfast.

One is Woodvale and the other is Dunville Park on the Falls Road.