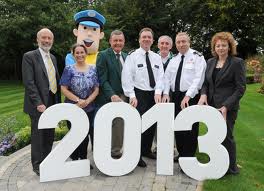 A CRUNCH match at the World Police and Fire Games between the PSNI and Marbella officers had to be abandoned because of touchline Spanish argy-bargy.

The management team of Marbella Police were furious after their team was reduced to nine men after of their players were sent off on Monday.

And so serious was the abuse on match officials that the referee blew the whistle early in the over 35s game.

According to observers, the Spanish side team had taken a very early grip on the game, 2-0 ahead within 10 minutes.

However, Matt Baggott’s boys fought back and drew level by half time with the match finely balanced at 2-2.

Marbella pulled off a spectacular moment of brilliance when their midfielder spied the PSNI keeper at the edge of the penalty area and launched a David Beckham-style lob from the centre circle that dropped over the PSNI goalkeeper.

But despite going ahead, the Spanish side lost their discipline.

Firstly, one player shoved a PSNI player off his feet to the ground and was give a red car.

However, the Marbella players took exception to this decision and a second player was shown the red car.

The Spaniards, even though they were still winning,  remained unhappy about the match officials.

They continued to harangue and verbally abuse both the referee and the assistant on the side near their bench.

After he issued several unheeded warnings to the team to calm down and desist, the referee took the brave and, to my mind, correct decision to call the game to an end with 15 minutes remaining.

It now puts the PSNI team top of the tournament with two matches remaining.

And the gold medal remains in sight for the over 35s team.