NI TOURIST ATTRACTIONS A MATCH FOR THE WORLD’S BEST 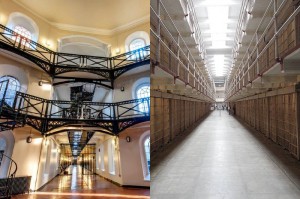 FROM breathtaking coastlines to fortified cities and a vacant jailhouse, Northern Ireland’s tourist attractions are on a par with many of the world’s famous sites, according to the Northern Ireland Tourist Board (NITB).

Full of natural beauty and fascinating places to explore, there is no need to travel around the world to indulge in history, catch a glimpse of stunning scenery or see some of the world’s most captivating sites.

“Northern Ireland is an enthralling place to visit with sites and attractions that are on a par with many of the world’s famous tourist attractions,” says NITB Destination PR Officer Pauline Gormley.

“Each one offers a unique insight into Northern Ireland, from its past and the time of the Ulaidh who were the people of early Ireland that gave their name to the modern province of Ulster right through to its future and political landscape,” she said.

“We have our very own breathtaking coastline along the North Coast route which is ranked among the top in the world, sites of important archaeological importance such as Navan Fort and the Beaghmore Stone Circle and places that are completely unique to Northern Ireland that can’t be found anywhere else in the world including the Giant’s Causeway,” she added.

To help you discover more of what is on offer in Northern Ireland, NITB has compared some of the world’s most famous attractions with those right on our own doorstep.

You don’t have to travel to China to see an example of walled fortification as the city of Derry is one of the finest examples of a Walled City in Europe and the only remaining completely intact walled city in Ireland. Just like the Great Wall of China, the City Walls were built as a defence mechanism against invasion. Built during the period 1613 – 1619 to defend against early 17th century settlers from England and Scotland, the Walls of Derry were one of the few fortifications that were never breached. They are approximately one mile in circumference and provide stunning views over the historic landscape.

If you are looking for a spectacular coastal drive then the Antrim Coast tops the list of the most breathtaking, sea-hugging routes in Europe, according to the Sunday Times travel section. The coastline is packed with stunning scenery including the Giant’s Causeway, Carrick-a-Rede rope bridge, Dunluce Castle, Cushendall, Cushendun and the fishing village of Glenarm. The Antrim Coast has been ranked first in the list of the Six Best Coastal Drives which includes Biarritz to Bilbao, Naples to Tropea, Dieppe to Le Havre, Kalamata to Monemvasia and a round trip of Reykjavik.

On the Inside – Crumlin Road Gaol

Just like San Francisco’s Alcatraz Prison, Belfast has its very own vacant jailhouse full of history and notable inmates. Closed in 1996, which marked the end of 150 years of imprisonment, conflict and execution, the Crumlin Road Gaol was designed by Sir Charles Lanyon, built between 1843 and 1845 and cost £60,000. The jail was modelled on London’s Pentonville prison and throughout its history it is estimated that around 25,000 prisoners were held here. It is now the only Victorian era prison to remain in Northern Ireland. In the Gaol’s lifetime 17 men were executed by hanging and their bodies buried within the prison walls in unconsecrated ground. Today its cells are vacant, wings silent and the yards are empty, and historical and educational guided tours are running where you can hear about the history of the prison from the time when women and children were held within its walls through to the political segregation of republican and loyalist prisoners. The historical and educational tours of the Gaol run every day between 10am – 4.30pm (Christmas Day, Boxing Day and New Years Day excluded).

The White House is one of the world’s most symbolic buildings but when it comes to political power houses Belfast’s ‘House on the Hill’ is just as architecturally impressive. Home to the Northern Ireland Assembly, Stormont was officially opened in 1932 by the then Prince of Wales and is set in the grounds of Stormont Estate which is a public park with majestic lawns and forest paths. The great white Grade B listed building is made from English Portland stone and has six floors and six pillars at the entrance of the building, representing each county of Northern Ireland. It is open to the public between 9am – 4pm Monday to Friday.

According to Irish mythology, Navan Fort in Co. Armagh was one of the great royal sites of pre-Christian Gaelic Ireland and the capital of Ulaidh (where the name Ulster originates from). It was founded by the goddess Macha in the 5th or 7th century, around the same time of the construction of the Parthenon Temple in Greece. Archaeological excavations at Navan Fort have revealed that a 40 metre mound that is still present today on the site dates back to 95 BC when it is believed to have been used for a pagan ceremonial purpose.

Few bridges are as impressive as California’s Golden Gate Bridge but if you don’t want to travel over 5,000 miles there is a stunning suspension bridge located a little closer to home. The Peace Bridge was opened in 2011 and is a cycle and footbridge across the River Foyle in the city of Derry. The 235 metre bridge was designed by Wilkinson Eyre, who also designed the Gateshead Millennium Bridge in Newcastle upon Tyne. The inspiration for the bridge was Derry’s iconic hands across the divide sculpture, conceived as two distinct structural systems that work in harmony. At the middle of the river both systems overlap, boldly interacting to create a single unified crossing – a structural handshake across the Foyle. It is illuminated at night and is fast becoming a major landmark in the city.

Forget the standing stones of Stonehenge, the Beaghmore Stone Circle in Cookstown, Co. Tyrone was discovered during peat cutting in the 1940s and is a fascinating complex of early Bronze Age megalithic features, seven stone circles and cairns.

It is possible that Neolithic occupation and cultivation preceded the erection of the burial cairns and ceremonial circles that can be seen on the site today. It is thought to have been a focal point for religious or social gatherings with some archaeologist believing the circles were constructed in relation to the rising of the sun at the solstice as a plea to the gods to help with crops.

Just like Hoover Dam, the Silent Valley Reservoir has become an important visitor attraction, attracting around 50,000 visitors per year who come to enjoy the peace and solitude of this mountain area with its unique landscape and varied wildlife. Situated in an area of Outstanding Natural Beauty, Silent Valley features a dam ringed by dramatic mountain panoramas and the famous Mourne wall located in the U-shaped valley of Kilkeel river. The reservoir is the main water supply for most of Co. Down and a large part of Belfast.

Film locations – The Game of Thrones

The stunning landscapes in the Lord of the Ring’s trilogy captivated movie fans from around the world and saw them flocking to New Zealand to marvel in its breathtaking scenery. Now movie fans have also been flocking to Northern Ireland to tour the locations used in the filming of HBO’s Game of Thrones, one of the most popular and successful fantasy TV series ever made. The series is shot on location in Northern Ireland and locations include the Titanic Studios, Tollymore Forest Park, Ballintoy, Shane’s Castle, Inch Abbey and many more. It is already said to have contributed £65 million to the local economy.

Northern Ireland is also home to many unique tourist attractions which can’t be found anywhere else in the world. Belfast is the birthplace of the world’s most famous ship, the Titanic, and 2012, the 100th year anniversary of the sinking of the sink, saw the Titanic Belfast visitor attraction open which is now the most popular tourist attraction in Northern Ireland. Located right beside the ship’s construction site, Titanic Belfast tells the story of the Titanic from its conception in Belfast, to its tragic end and the discovery of the wreck.

Also unique to Northern Ireland is Northern Ireland’s only UNESCO World Heritage Site, the Giant’s Causeway, which was formed due to intense volcanic activity 60 million years ago. It is steeped in legend with the most famous myth being that it was built by Finn McCool as a way to reach his Scottish rival Benandonner. The story goes that Finn fell asleep and the Scottish giant came across to find him. Upon seeing that the Scotsman was much larger than her husband, his wife Oonagh wrapped him up and passed him off as her baby. Benandonner began to wonder what size the ‘child’s’ father must be and made his return to Scotland, tearing up the Causeway as he went.