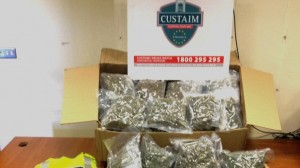 The herbal cannabis drugs haul seized by Customs in the Republic

CUSTOMS in the Republic have seized herbal cannabis with an estimated street value of €1.2 million.

It was found in a Northern Ireland registered trailer at Rosslare port in Co Wexford.

Two men in their 20s, both with addresses in NI, have been arrested by gardaí for the illegal importation of the drugs.

The 60kg find was made by an Irish Revenue sniffer dog on Saturday.

The trailer, which arrived in on a ferry from Cherbourg in France, was searched and the cannabis was found concealed in a consignment of tiles.

“The men are detained at Wexford Garda station under Section of the Criminal Justice (Drug Trafficking) Act, 1996 and may be detained for up to seven days,” a gardaí spokesperson said.

The discovery comes a day after Revenue Officers made a huge seizure at the same port.

Heroin with a street value of almost €1.54m was found in a vehicle that had disembarked a ferry from France.

A Mercedes Jeep was scanned by the Customs X-Ray Scanner, which indicated an anomaly, and the 10.26kg haul of heroin was found concealed in the vehicle.

A Dutch national in his sixties was arrested and taken to Wexford Garda Station shortly.