EXCLUSIVE: LOYALISTS have reacted with fury on Sunday after Facebook banned the Protestant Coalition from its global social networking site.

They now plan to picket Facebook’s European headquarters based in Dublin after the site was removed.

A source close to the group said they believed the Facebook ban has come about after the comments posted last week by DUP councillor Ruth Patterson about a fake massacre at an IRA commemoration.

Said the source: “We believe Faceboook has come under pressure from both the PSNI and MI5 to stifle the voice of disgruntled loyalists.

“They have been hacking into private messages on private pages.

“And what do they fear? They fear the truth.”

On Sunday, the Protestant Coalition, set up by victims campaigner Willie Frazer earlier this year, launched a video on Youtube about the Facebook ban.

A spokesman read out a statement on behalf of Willie Frazer which said: “Facebook has been Protestants by their scores if not by their hundreds over the past week for allegedly breaching its rules.

“This includes posting up the Red Hand flag and the Protestant Coalition logo. 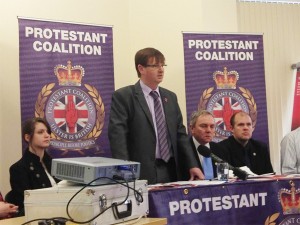 “Others were banned for posting up comments such as ‘Ruth Patterson just released.”

“This is intolerable but things took a more sinister turn when our party’s official Facebook page was not published by Facebook. We are the largest Facebook party in Northern Ireland with over 6,500 likes and over 600,000 people engaged.

“This gave our party the biggest social media reach of any political party in Northern Ireland.

“This puts us a particular disadvantage as the only party not to have a Facebook page.

“We have been reporting of the last week that dozens if not hundreds of loyalists were being banned from Facebook.

“It is because we have the word Protestant in our name.”