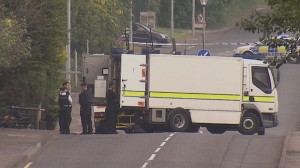 THE SDLP has condemned those who abandoned a car in south Belfast forcing the evacuation of up to 100 homes overnight.

The security alert ended on Saturday morning but not without causing major disruption to local families who were out of their homes for around 12 hours.

Police and Army Technical Officers were called to the scene at Notting Hill Manor, off the Malone Road, where a vehicle where was abandoned on Friday evening.

During the security alert, the ATO carried out a number of controlled explosions on a suspicious object found in the car.

However, on Saturday morning the PSNI said: “Nothing suspicious was found.”

Several hundred residents have been allowed to return to their homes after being evacuated overnight.

Fifteen elderly residents in sheltered accommodation were among those affected.

Residents were allowed to return to their homes just before 7 am on Saturday.

As a result, police have reopened Malone Road and Marlborough Park areas to traffic.

Local SDLP MLA Conall McDevitt, who visited the scene of the alert, said it was “a pointless and futile action”.

“Those who abandoned that car on Malone Road have been and will continue to be rejected by this city.”