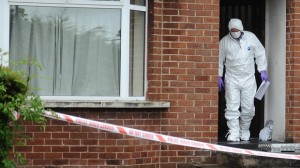 A MAN has faced a court on Saturday morning accused of the murder of a migrant murder following a house row.

The 36-year-old, who was from East Timor, had been living and working the town.

In the dock of Omagh Magistrates Court on Saturday morning was Tomas Hornay.

The 34-year-old, also from Woodvale Park was charged with the murder of Mr Ximenes at the semi-detached house in the early hours of Thursday morning.

The defendant was remanded in custody to appear by video link at Dungannon Crown Court later this month.