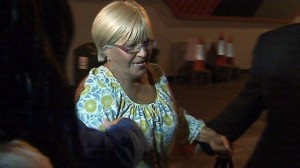 LOYALISTS were being urged to come out in numbers on Saturday for a Union Flag protest at Belfast City Hall.

A message posted on Facebook on Saturday said: “It Saturday folks which means only one thing: our Union Flag Protest at Belfast City Hall from 1pm .

“Lets show our support today for Ruth Patterson she is one of our own , she has stood with us from day one in all weathers . If you care be there and bring a Flag. NO SURRENDER!”

On Friday evening, the former deputy lord mayor of Belfast was released by police and charged with posting a “grossly offensive” remark on Facebook.

The DUP councillor was freed late on Friday evening after 12 hours of questioning.

A source said: “She was very emotional when came out. It looked like she had been through a terrible ordeal.”

Ms Patterson has been been charged with the sending of a grossly offensive communication contrary to Section 127 of the Communications Act 2003.

The 57-year-old is due to appear at Belfast Magistrates Court on Monday, August 22.

Ms Patterson was arrested just before 9 am on Friday as she was about to leave her home for work.

She was taken to Musgrave Street PSNI station in Belfast for questioning.

Councillor Patterson was arrested under section 127 of the Communications Act 2003 for what the PSNI described for “grossly offensive communications” she posted on Facebook.

It follows her remarks posted on Facebook on Thursday about a fake massacre at next week’s IRA commemoration parade in Castlederg, Co Tyrone.

Earlier in the day, the DUP said it was to seek a meeting with PSNI Chief Constable Maggott over what it describes as the “sensational arrest” of councillor Ruth Patterson.

It said she could have been invited to attend a police interview in the same way as north Belfast Sinn Fein MLA Gerry Kelly was over obstructing a police land rover in June during the ‘Tour of the North’ parade.

In a statement issued on Friday afternoon, the party said: ““The DUP was founded on the principle that everyone should be equal under the law and equally subject to the law.

“Councillor Ruth Patterson has apologised for her remarks, accepted they were well below the standard expected of a public representative and not in keeping with the DUP’s values and ethos.

“The Party Officers also emphasised the unacceptable nature of these stupid and obnoxious comments and will conclude its own internal investigations.

“We fail to understand why the police chose to conduct a sensationalist arrest rather than contact Ruth and ask her to attend an Article 10 voluntary interview.

“This is a matter we will be raising with the Chief Constable.

“By contrast Gerry Kelly who bombed the Old Bailey and who was filmed obstructing a police land rover has yet to be arrested. Ruth was guilty of an error in judgment: others in Sinn Fein are guilty of far more serious crimes.

“If there is a legal process to be followed then we will await its outcome: others, who in the past set themselves up as judge, jury and sometimes literal executioners, should do likewise before commenting further.”

Meanwhile, loyalists staged a number of protests on Friday evening over the arrest of DUP councillor Ruth Patterson.

One was held outside Musgrave Street PSNI station.

A rally was also held at top of the Donegall Road at 6 pm to “show support” for the councillor who was arrested on Friday morning. 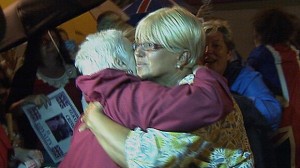 The former deputy Lord Mayor of Belfast was detained by police after she branded Sinn Fein MLAs as “evil”.

And she said a bomb attack on an IRA commemoration parade next month would “do a great service to Northern Ireland” if it wiped out its leadership.

The councillor made her comments following a post on Facebook which imagined an attack on Sunday, August 11 in Castlederg, Co Tyrone which killed scores of people, including Gerry Adams and Martin McGuinness, and injured hundreds of others.

On Thursday, relations between the parties nosedived further when Councillor Ruth Patterson penned on Facebook: “Who cares how you would be judged.

“We would have done a great service to Northern Ireland and the world getting rid of these evil, devious, scum like individuals who bombed and murdered their way into government, who walk the corridors of power leaving their blood stained hand prints on everything they touch.”

The DUP said in a statement issued on Thursday afternoon: “Ruth’s comment was completely unacceptable.

“It is not in keeping with the party’s policies or the standard of behaviour required of our members.”

However, it is not known if Councillor Ruth Patterson will face any internal disciplinary procedures for her social network outburst.

But the party statement added: “Whilst the officers of the party will clearly be looking at this issue, they will take account of her subsequent statement.”

In her statement, the councillor said: “I unreservedly apologise for this lapse of judgement. I completely withdraw this flawed Facebook comment.’

“Murder and terrorism can never be justified in any circumstances.

“My ill-judged comment is completely incompatible with the polices of the DUP and what is expected of me as Councillor.”