RULING DUE ON IRA COMMEMORATION PARADE

THE Parades Commission is expected to rule later on Thursday on a controversial IRA parade.

The ‘Tyrone Volunteers Commemoration’ parade is held to remember the republican dead, including two IRA members killed by their own bomb in 1973.

Sinn Fein MLA and Policing Board member Gerry Kelly is due to make a speech at the event on Sunday, August 11.

His party has offered to re-route the parade away from the town’s war memorial and Methodist church.

However, unionists have described the parade as “grossly insensitive” and say it should not be allowed to go ahead.

Delegations from Sinn Féin, the DUP and Ulster Unionists have met with the Parades Commission to discuss the parade.

A local victims groups has applied to the Parades Commission to hold a protest on the same day as the IRA rally.

The DUP leader said there was “absolutely no justification” for the republican parade in Castlederg, Co Tyrone.

Deputy First Minister Martin McGuinness said re-routing the parade had been sensible but the issue raised broader questions about dealing with the past.

Peter Robinson, however, described the parade as insensitive and said it glorified terrorism.

“The principle purpose is to glorify two individuals who sought to bomb Castlederg, but blew themselves up well away from Castlederg,” he said.

“If you are going to have a commemoration at all, and I think it’s inappropriate to have it at all, you would have it at the place where they blew themselves up rather than the target town. That is totally insensitive.”

Martin McGuinness said the issue was “of how we deal with the past and whether or not people have a right to commemorate those people who have lost their lives”.

“Right across society in the course of recent years, we have seen people on all sides of the debate, albeit from a different perspective and different narrative, honour their dead.” 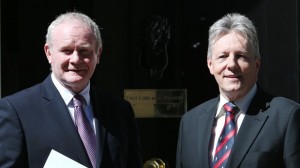 However, there is still deep opposition to the parade from unionists.

West Tyrone MLA Thomas Buchanan, who will led a DUP delegation to the Parades Commission, said the parade was “obnoxious”.