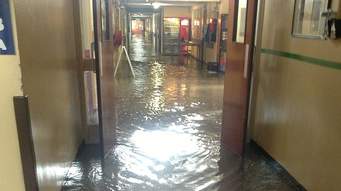 IT is going to take up to a year to fix a hospital submerged in water following a freak flood last week.

The revelation was made on Thursday by Sinn Fein president Gerry Adams on a visit to Letterkenny General Hospital in Donegal.

The north Louth TD said he was “left in shock” after seeing the damage from last week’s heavy weather storm.

He said he has been told that it will take A YEAR to repair the damage to the hospital.

He visited the facility along with local TD Padraig MacLochlainn and Sinn Féin councillors from the area earlier today.

The group met with Sean Murphy the hospital general manager and Ann Flood, director of nursing along with other members of the management team and was given a tour of the building.

The Sinn Féin president said afterwards: “The scale of the damage is truly shocking.

“I am told that 40% of the hospital was decommissioned in the space of an hour.

“I want to commend the heroic work of the hospital staff who managed an evacuation of patients, in torrential rain.

“They have done Trojan work since, not only on the clean-up, but also in securing alternative accommodation for the patients of the hospital.

“This was a major emergency for the hospital and the people of Donegal.

“It will take a year or more to repair the damage and I call on the HSE and the government to provide all that is required to facilitate a return to full services.”

Earlier estimates had set next March or April for all facilities to be returned to normal.

Now the Sinn Fein president believes that after his meeting today it will be a year or more before the hospital is functioning at 100 per capacity again.