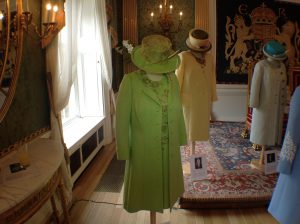 A new exhibition of outfits worn by The Queen during recent cross border state visits will open to the public at Hillsborough Castle tomorrow, Thursday, August 1.

Among the collection are outfits worn Her Majesty during her Diamond Jubilee visit to Northern Ireland in June 2012, and during her historic visit to Dublin in May 2011.

Five of the six outfits on display and all six hats were designed by Angela Kelly LVO, personal assistant and senior dresser to The Queen since 2002.

Angela also designed The Queen’s outfit for the wedding of their Royal Highnesses the Duke and Duchess of Cambridge.

The sixth outfit was designed by Karl Ludwig, business partner of John Anderson who designed Her Majesty’s dresses from 1988 until 1996. Karl took over the mantle after John’s death in 1988 and The Queen still wears his designs today.

“It is always a great privilege to have Her Majesty The Queen’s outfits on display at Hillsborough Castle.

“This year we have secured the exhibition for an extra month so that many more visitors to the Castle will have the chance to admire the collection.

“Hillsborough Castle is the Queen’s official residence in Northern Ireland, full of Royal and political history.

“I hope that both local people and ourists visiting the exhibition also take the opportunity to tour the beautiful house and gardens and find out for themselves why Hillsborough is so special.” 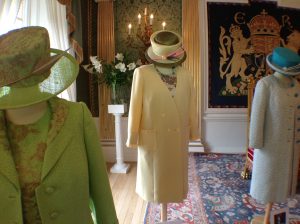 This pale lemon double-breasted coat and hat was worn when the Queen visited Dublin in May 2011embers of the media were given a special preview of the exhibition today, with local fashionistas Lynne and Zara Beggs – owners of Hillsborough’s award winning boutique Candy Plum – plus Belfast milliner Grainne Maher and members of the Women’s Institute on hand to offer their expert opinion.

Commenting on the exhibition, Grainne Maher said: “All six hats are a very similar, classic design with a short brim and fabric covered crown, and trimmed with arrowhead quills. Her Majesty obviously knows what she likes and Angela Kelly is an expert at reinventing the style over and over.”

Lynne Beggs said: “Her Majesty clearly knows her style, which is simple but with an elegant and timeless twist.

“She wears a lot of bright colours that make her stand out in a crowd. It is important to have a designer and style that suits you, and in Angela Kelly The Queen most definitely has that.”

Following last year’s successful exhibition of formal gowns worn by The Queen at state occasions, this new collection will also be on display in the Throne Room at the Castle.

Booking is strongly advised. Group tours may be possible at other times, subject to the Castle’s diary. For more information and to book, contact Hillsborough Castle on 028 92 68 94 06 or email hillsborough.castle@nio.x.gsi.gov.uk.