COUNTDOWN BEGINS TO WORLD POLICE AND FIRE GAMES IN BELFAST 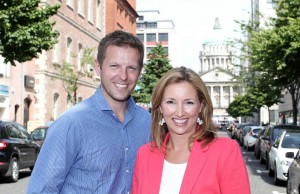 IT has been years in the planning and now the time has almost come for the official start of the World Police & Fire Games in Belfast.

And BBC Northern Ireland will be bringing live coverage of the opening ceremony at 6.30 pm.

Police and fire officers from around the world have arrived and are ready to do battle in their respective competitions.

Live pictures will be beamed across the world through online streaming from the opening ceremony which takes place on Thursday, August 1 in the grounds of the King’s Hall complex.

BBC NI cameras will also be recording at the opening event for a special one-hour highlights programme to be shown shortly after the ceremony.

Presented by Gavin Andrews and Claire McCollum the programme will look back at the colour and spectacle of the opening ceremony as well as meeting up with some of those who have travelled from far and wide to take part in some of the events across the 10 days.

Peter Johnston, Director BBC Northern Ireland, said: “BBC Northern Ireland is delighted to be the official broadcast partner for this prestigious sporting event, with coverage of the opening ceremony across TV, radio and live online, as Northern Ireland prepares to welcome thousands of competitors and their families from across the globe.

Over the course of the 10 days BBC Sport NI will be reporting on various events for BBC Newsline.

There will be further coverage of the games on BBC Radio Ulster including a number of outside broadcasts from across some of the different events.

Talkback resonates to the sound of leather on willow as the World Police & Fire Games get under way.

Wendy Austin will be live at the Stormont estate on Thursday, August 1 from 12-1-30pm, where the cricket competition will be in full swing.

Along the way she’ll hear from athletes from across the world and try her hand at the hose drag and stair climb to find out what fire fighters put themselves through on a daily basis.

Later that day, Alan Simpson brings his afternoon programme from the King’s Hall complex on between 3 and 5pm looking towards the opening ceremony of the games in the evening.

Anne-Marie McAleese and the Your Place and Mine team head to Donard Park in Newcastle on Saturday, August 3 from 8.05 to 9.05am – the location for the WPFG mountain running event.

Hugo Duncan will be at the Titanic Slipway on Wednesday, August 7 from 1.30-3pm, where the WPFG Ultimate Fire Fighter competition will take place.

Further BBC Radio Ulster programmes including Gerry Kelly, Summer Club and The Saturday Magazine will be reflecting the games throughout the 10 days.