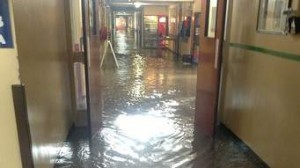 PEOPLE in need of medical help from Co Donegal are now being refused access to Altnagelvin Hospital in Derry.

Following the flooding of Letterkenny General Hospital, an arrangement had been agreed for patients from Donegal to get treatment in Derry.

But now ALL patients from across Donegal are told they must travel to Sligo General Hospital for treatment as Altangelvin is taking no more patients from the Republic.

More than 100 patients from Co Donegal had attended Altnagelvin over the weekend since Letterkenny was flooded.

As of 7pm last night, Tuesday, July 29, Alnagelvin have been advising patients from Co Donegal that they are full to capacity.

Privately it has been accepted by hospital sources that they will not turn away emergency cases.

Sligo Hospital is also struggling to cope with the sheer volume of patients.

It has been transferring patients to Carrick-on-Shannon, Manorhamilton and Mayo in a bid to free up space there.

Meanwhile, management and staff or Letterkenny General Hospital have been assured it will get funding for full renovations following the horrific flood damage

There have been serious concerns in recent days that the millions of pounds in damage caused by torrential flooding could lead to some form of downgrading.

But the Government has now moved to reassure staff that the hospital will be renovated fuly.

Donegal Senator Jimmy Harte met with hospital staff to assure them this will happen.

“I met with the Hospital manager, Sean Murphy, and staff members as well as HSE officials on Monday in the hospital.

“I was in contact with the Tanaiste about the seriousness of the flood damage and the subsequent disruption to services. A

“According the Mr Murphy the hospital has lost 40 per cent of it’s capacity after the flood on Friday last.

“This is unprecedented in recent times for any hospital in the country.

“I spoke today with Brendan Howlin TD today, Minister for Public Expenditure, and he assured me that the funding is there to reinstate the hospital to normality.

“This is reassurance to the staff, patients, and the public in Donegal who are concerned that the hospital may struggle with the costs.

“Minister Howlin and Minister of State Alex White are being briefed on the situation on a daily basis and I will relay any concerns to them from staff and the management.

“I would commend the hospital staff and volunteers who assisted with the clean up and the next phase of assessing the damage and getting services back at full capacity will be challenging but all the agencies involved will be working to that end.”