2024: THE YEAR MILLTOWN KILLER STONE COULD BE FREED ON PAROLE 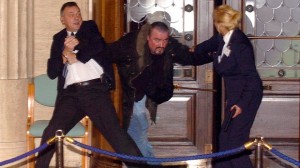 It means 58-year-old Stone will remain in the top security Maghaberry Prison for another 11 years.

And in 2024, the loyalist-for-hire killer, who will then be 69, could make his first application to the Parole Commissioners to be freed.

However, his release on parole is not automatic.

The Parole Commissioners will have to consider whether it is safe for the public to have Stone back on the streets.

Lord Chief Justice Sir Declan Morgan announced his decision in the Court of Appeal in Belfast.

The loyalist paramilitary Michael Stone was sentenced to 16 years in prison for the attempted murder of Sinn Fein leaders Martin McGuinness and Gerry Adams in a raid on the Northern Ireland Assembly.

Stone’s attack on Stormont in November 2006 was the second time in 20 years that Stone had tried to murder Adams and McGuinness.

The 53-year-old, one of the most notorious terrorists of the Troubles in Northern Ireland, was also convicted of six charges including possession of weapons and explosive devices, at Belfast crown court.

In 2000, Stone was freed early on licence, under the Good Friday agreement.

In his ruling on Monday, the Lord Chief Justice said that although Stone pleaded not guilty to all the charges he instructed his Counsel to take no active part in resisting the prosecution case which was based on the eye witness evidence and his confessions.

The Lord Chief Justice said that in this case there was a clear finding by the trial judge that the prisoner displayed no evidence of remorse and accordingly the manner in which he defended his case could not be given weight.

The Lord Chief Justice considered that the killings in 1988 were “professional as the prisoner had offered his services as a killer to any loyalist group who would use him.”

He added: “The killings were politically motivated in that they were directed at a section of the public identified by the prisoner as holding certain political views.

“The prisoner also committed multiple murders with the intent to strike fear into the community at large.”

The senior appeal judge concluded that this was undoubtedly a case where the higher starting point applied.

The Lord Chief Justice referred to the other aggravating factors: the killings were planned and premeditated and the prisoner had armed himself with extensive weaponry.

He said there were no mitigating factors of significance.

“The effect on his victims will live with them forever,” added the Lord Chief Justice.