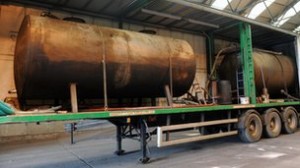 The mobile fuel laundering plant seized by Customs on Wednesday

THREE men have been arrested after a mobile fuel laundering plant capable of producing 4.3m litres of illicit fuel a year was seized in County Antrim.

The men from Antrim and Derry were detained after the plant was uncovered at a yard on Wednesday afternoon.

Two large tanks chained to the inside of a trailer along with pumps and equipment were seized.

Almost 2.5 tonnes of toxic waste and 4,000 litres of red diesel were found.

John Whiting, from Revenue and Customs, said: “These tanks carrying diesel were simply chained to the trailer, showing a total disregard for other road users and posing an enormous public safety risk.

“Buying illicit fuel not only funds crime, but also supports and encourages these dangerous activities within our communities.”

The three men have been released on bail.

Huge amounts of money can be made from fuel-laundering.

Farmers and some industries can buy diesel at a considerably cheaper price than road users.

A red dye is put into the discounted fuel in Northern Ireland to prevent it being used illegally.

In the Republic of Ireland, green dye is used.