PILOT HAILED A ‘HERO’ AFTER CRASHING PLANE AWAY FROM KIDS 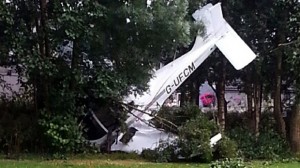 A PILOT who safely crash landed a light aircraft in playing fields away from a group of children has been hailed as a hero.

Michael McGrady and his passenger cheated injury after bringing the G-UFCM plane down in Newtownards, Co Down, on Thursday afternoon.

It ended up nose-first in a hedge at playing fields in the Dairy Hall area.

Mr McGrady, who is chief flying instructor for the Ulster Flying Club, made the deliberate decision to make an emergency landing after suffering engine failure mid-flight.

However it was testament to his skill as a pilot that he was able to avoid children playing nearby, as well as a local police station in a built-up area of the town.

A statement from the Ulster Flying Club said: “Michael was at the controls on approach to runway 15 and experienced a loss of power. With amazing skill he managed to get the aircraft in to the playing fields next to the police station.”

The aircraft suffered significant damage but the two people on board were able to walk away without any serious injuries. They were treated at the Ulster Hospital for shock.

The Ulster Flying Club continued: “Best wishes to Michael and his student for a speedy recovery.

“Thanks must also go to the Northern Ireland Fire Brigade, Ambulance Service and the PSNI for their assistance in the aftermath of the incident and recovery of the aircraft.”