I’M SO PROUD OF MY BOYS, SAYS BLUES BOSS JEFFREY 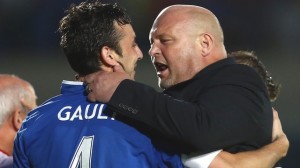 LINFIELD manager David Jeffrey has saluted his players despite exiting the Europa League on Thursday night.

The Blues went out on away goals after a heartbreaking 2-1 defeat by FC Xanthi at Windsor Park.

However, the manager had nothing but praise for the away his players had performed home and away.

“I am immensely proud of my players,” said Jeffrey.

“I thought it was an outstanding performance.

“And really we have no right to to feel as disappointed as we are feeling.

“The players are absolutely gutted as are all the staff and myself.”

And he also praised the Linfield fans for backing the players throughout the 90 minutes at Windsor Park.

“The supporters were absolutely fantastic. They got right behind the players from the very first minute of the game. They drove the players.

“We played great football and what a stunning goal from Michael Gault.”

The Irish Premiership side had led 1-0 from the first leg but Pereira Marcelinho’s goal in the 27th minute levelled the game on aggregate.

The Greek side had Konstantinos Fliskas sent-off just before half-time.

Michael Gault scored a superb volley in the ninth minute of extra-time but Marcelinho squeezed in a shot at the near post to put Xanthi through.

They now face Belgian side Standard Liege in the third qualifying round.

Linfield can be proud of their display but will be desperately disappointed having come so close to a memorable triumph.

Blues boss David Jeffrey had warned about the threat of the Greek side and the Irish league side suffered a setback when Marcelinho worked his way in from the left wing to net a low shot from an acute angle.

Fliskas was red-carded just before the interval for a bad tackle on Michael Carvill but there were no goals in the second half so the tie went to extra-time with the teams locked on 1-1 on aggregate.

The pendulum swung Linfield’s way when skipper Gault crashed in a fantastic volley to put the Belfast club 2-1 up overall, 1-1 on the night.

But dreams of a third-round meeting with Standard Liege were ended when Marcelinho’s shot beat Blues keeper Jonathan Tuffey at his near post.