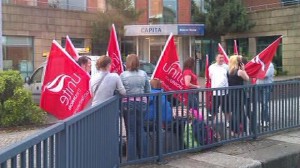 WORKERS at the financial sector company Capita have gone on a one-day strike on Friday.

It follows a dispute over pay with employees saying they believe the firm’s current system is unfair.

Talks broke down between staff, Unite union officials and management over an increase offer that they say is less than inflation.

Capita, based at Clarendon Docks in Belfast, has seen its profits rise by 10 per cent on last year.

Workers from the life and pensions and IT services divisions overwhelmingly voted in favour of industrial action, with many of the company’s clients expected to be disrupted on Friday.

Unite staff official Daryl Williams said: “Workers from Capita have sent a clear message that the company’s pay policy is not fit for purpose. It is unjustifiable to give most hardworking staff a real terms pay cut when profits are up by 10%.

“Capita’s clients now face the prospect of considerable disruption because of the company’s failure to recognise its workers’ contribution.

“We urge the company to return to the negotiating table or Capita and many of its financial services clients will face considerable disruption.”