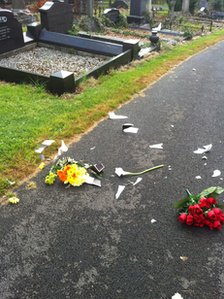 POLICE are investigating after 20 graves at Belfast City Cemetery were vandalised.

The PSNI said officers received a report about criminal damage in the area in the early hours of Wednesday morning.

A spokesperson said patrols are paying attention to the cemetery at night and neighbourhood officers are also in the area throughout the day.

“None of the grave sites seem to have be a specific target. Anti-social behaviour over the past few nights seems to be the reason,” he said.

“Headstones have been smashed and some have been covered in graffiti and candle wax. This is twenty more grave sites than it should be. It’s beyond belief why anyone would do this.”

Meanwhile, police are appealing for information following the theft of a large ornament from a grave in the Crumlin area.

The angel ornament, which is white with a faded gold inscription, was taken from the Antrim Road graveyard some time between Thursday 18 July and Monday 22 July.

The statue is said to be of great emotional significance for the family.