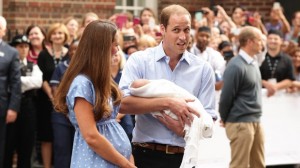 BABY Cambridge has finally got his royal name.

It ended intense speculation over the name for the third in line to the thrown.

He will be styled as the Prince of Cambridge and, if necessary, will use the surname Mountbatten-Windsor.

The Duke and Duchess of Cambridge presented the future king to the world outside St Mary’s Hospital in London on Tuesday, just over 24 hours after he was born.

George, and other traditional names like James, had been among the favourites at the bookies.

The baby’s name has long-standing royal ties, with six kings called George having worn the crown.

The last was the Queen’s father George VI, who died in 1952 – but he was known to his family as Bertie.

There has only been one other Prince of Cambridge and he was also called George.

The first Prince George of Cambridge was a grandson of George III and the only son of Prince Adolphus Frederick, the 1st Duke of Cambridge, born in 1819.

The name Louis is likely to be a tribute to Lord Louis Mountbatten, the Duke of Edinburgh’s uncle and the last British Viceroy of India before independence in 1947.

Mountbatten, who was a fond and close relative of Prince Charles, was assassinated by the IRA in August 1979.

His boat was blown up on a fishing trip off the coast of County Sligo, Republic of Ireland.

The couple are understood to have had a few ideas for names in mind but it took a few days for them to finally confirm which one was right for their son.

The Queen saw her great-grandson for the first time on Wednesday morning when she visited the Duke and Duchess at their home at Kensington Palace and would have been told by the couple of their choice.