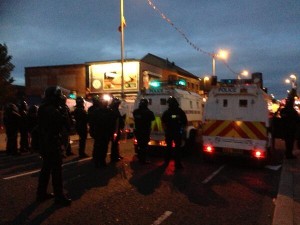 DETECTIVES investigating rioting in east Belfast on the Twelfth of July have arrested a 20-year-old man.

The suspect was detained in the Beersbridge Road area of the city on suspicion of riot on Wednesday morning.

A PSNI spokeswoman said: “He is currently helping police with their inquiries.”

Trouble broke out as an Orange Order parade marched past the Short Strand to mark the Twelfth.

According to police, the parade was attacked with missiles from the nationalist area, while more missiles were also thrown into that area.