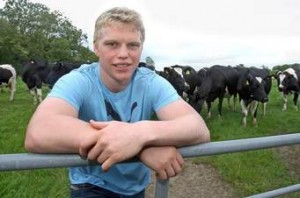 A FAMILY is in mourning on Tuesday night after a six-year-old boy died in a tragic accident on a farm.

Belfast Daily understands that police and farm safety investigators are looking at the possibility that the primary school pupil may have been overcome by gases from a slurry facility.

It brings back haunting memories of a slurry incident almost a year ago which claimed the life of Ulster rugby rising star Nevin Spence, his father and brother after they tried to rescue a dog.

Just before tea time on Tuesday, emergency services rushed to the scene at a farm belonging to the child’s grandfather after receiving a 999 call.

The Northern Ireland Ambulance Service said crews received a report of the incident at the Ballynahonemore Road in Armagh city at 5.15pm.

Emergency crews attended within minutes but the child was found dead at the scene.

A PSNI spokesperson confirmed that police and the Northern Ireland Health and Safety Executive have attended the scene of a sudden death of a child.

A major line of inquiry for the HSE and PSNI is that the child was overcome by the toxic gases of a slurry facility on the farm.

In September 2012, three members of the Nevin family were claimed in a slurry farming tragedy.

An inquest was told earlier this year that it was the worst farming tragedy in Northern Ireland for 20 years.

On the final day of the inquest in Belfast, Coroner John Leckey said it was an “unbelievable” tragedy.

John Leckey said the case had raised awareness about the dangers of slurry “throughout the British Isles”.

The men died after the accident on their family farm outside Hillsborough on 15 September, 2012.

The inquest has already been told that 30-year-old Graham Spence entered the slurry tank first in an attempt to rescue a dog.

He was overcome by fumes and his 22-year-old brother, Nevin, went in to try to save him but lost consciousness.

Their 58-year-old father Noel then entered the tank, but he too was overcome by slurry gas.

State pathologist Prof Jack Crane said the levels of hydrogen sulphide and other toxic gases were high enough to render the men unconscious.

Prof Crane said when they fell into the slurry tanks, they died after breathing in the liquid.

After Prof Crane had given his evidence, she asked the pathologist why her son Nevin appeared to have “succumb to the gas more quickly”.

He replied there may be no reason other than he might “have been more energetic in the tank and would have therefore breathed in the gases more quickly.”

The inquest also took evidence from members of the Health and Safety Executive of Northern Ireland (HSENI).

They explained the dangers of working with slurry and said that every slurry tank was dangerous.

In his concluding remarks, Mr Leckey said: “Everyone was riveted to the radio and news papers as they couldn’t believe such an awful tragedy could happen in the 21st Century.

“Until this happened not everyone was aware of the dangers. What I have been told is the message is getting across to the wider Northern Ireland farming community and their tragic deaths (are) known throughout the British Isles,” the coroner said.

Mr Leckey requested that the media referred farmers to the HSENI website for slurry safety advice; in particular the ‘safe system of work for mixing slurry’ which has been distributed in Northern Ireland in 10,000 leaflets.

He added: “This has been a loss to the farming community but (also) to anyone that loved rugby, and Nevin’s loss was felt right across the rugby world.”

The player was considered to be one of the up-and-coming stars of the Ulster team and had been widely regarded as a future Ireland international.

The coroner also repeated his admiration for everyone who tried to rescue the men.

Emma Rice, a sister of Nevin and Graham, climbed into the tank to try to save her family and had to be rescued by a neighbour.

Mr Leckey told the Spence family that the conclusion of an inquest could often bring closure for relatives, but because the enormity of the tragedy he said he did not think it was the case here.

He added: “I genuinely hope you will be able to get on with your lives.”


One Response to SLURRY LINK TO BOY’S DEATH ON FARM