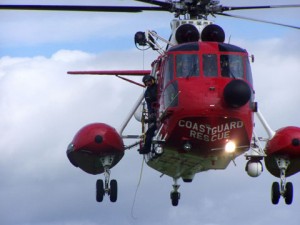 BREAKING NEWS: A major search operation is underway amidst fears that a mother and daughter from Northern Ireland have been drowned off the Donegal coast.

A massive operation was launched after a passer-by found a woman’s body at Roxstown Harbour close to Malin Head just before 6.30pm.

The woman’s car was found close by on the shoreline.

The woman is understood to be from Derry.

There was further panic after a member of the public said they had seen the woman earlier with a baby.

Gardai alerted the rescue services to the tragedy just after 6.30pm.

A number of emergency services have been circling the scene of the incident which is being co-ordinated by Malin Head Coast Guard station.

The rescue helicopter spent more than two hours in the area carrying out an intensive searching before refueling and starting to search again.

A spokesman for Malin Head Coastguard said tonight’s tide was one of the biggest of the year so far.

“It was a huge tide which peaked at 8pm and went out quickly.

“We got a call form the Gardai that a woman’s body had been located at Roxtown Harbour.

“Gardai were then told that a baby had been in the company of the woman earlier on.

“We have to assume that the woman was with the baby and that is why the search is still going on.

“The woman is from Derry and the PSNI are trying to establish contact with the family to see if the baby or child is missing,” he said.