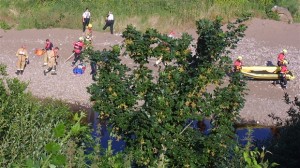 POLICE have released the name of a man who drowned in the River Strule, Co Tyrone.

James Kincaid was one of two men who got into difficulties in the river near Douglas Road at 5.20 pm on Saturday.

However, following a search of the river, the body of Mr Kincaid was retrieved.