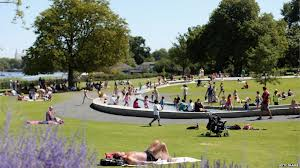 NORTHERN Ireland’s temperatures were almost on a par with the rest of the UK last week.

And Friday was the hottest day so far this year with Castlederg, Co Tyrone hitting 30.1C.

According to new MET Office figures, it wasn’t the highest temperature in the UK.

The overall record for 2013, however, was set last Wednesday when 32.2C was recorded at Hampton Water Works in southwest London.

Unfortunately for sunworshippers, the temperature plummeted a few degrees on Sunday, leaving many concerned that the region’s heatwave was fading in the mist.

But Brendan Jones, a senior forecaster with MeteoGroup, is predicting the sun will shine for a few more days at least!

This week, the island of Ireland is likely to see temperatures of up to 29C.

“From Monday to Wednesday it will be hot, and it is expected to be humid as well, which has not been the case so far.”

For later in the week, he predicted: “Some places are going to be seeing very active thunderstorms indeed, with a lot of lightning, and the possibility of flooding in a few places.

“From Wednesday to the end of the week it will be less hot, though still quite warm, with some rain around.”