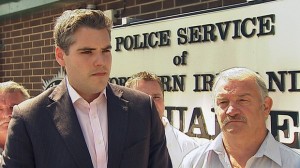 POLICE chiefs have admitted that a returning Orange Order parade through east Belfast on the Twelfh of July was attacked from Short Strand.

Loyalist community representatives met senior PSNI officers on Friday to express frustration over the police’s handling of a Twelfth of July return parade in east Belfast.

Police said the parade was attacked with a “significant number” of missiles including stones and paint bombs from the Short Strand area.

Loyalists said one person suffered a broken jaw and another needed ten stitches to a wound.

Speaking after the talks at PSNI headquarters, DUP councillor and former Belfast Lord Mayor Gavin Robinson claimed that police have privately apologised for how the situation was handled.

“The police privately apologised to all of us for what happened on the Twelfth of July and we encourage them to make their comments public,” Mr Robinson told UTV.

“We believe a statement will be forthcoming.

“I do not know if the apology will be part of but they have accepted that there was a lack of protection offered to those participating, those watching and those living in and around the parade on the Twelfth of July.”

Police said in a statement Friday’s meeting had been “frank and robust”.

They added: “The PSNI acknowledged that a significant number of missiles, including stones and paint bombs, had been thrown at the Parade from the Short Strand area.

“Similarly, missiles were also thrown into the Short Strand area.

“The PSNI expressed concern for those who had been injured as a result of those missiles and outlined that a full investigation has now commenced.

“The PSNI undertook to review, with both communities, the policing operation for Parades in that area to ensure an appropriate level of reassurance for each community.

“In relation to future Parades, and associated protests, the PSNI again emphasise the need for behaviour to be both peaceful and lawful and highlight the fact that attacks on Police Officers are wholly unacceptable and unjustifiable.”