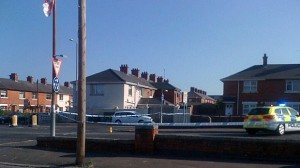 A LETHAL pipe bomb device has been found during a security alert in west Belfast.

The alert was in the Meadowhill Grange area on the Glen Road.

Police said the viable device had been taken away for examination along with a number of other items.

The search of the area is continuing for any further devices left,

However, all residents who were moved from their homes have been allowed to return.

Earlier, police reopened the Westlink in both directions following a security alert.