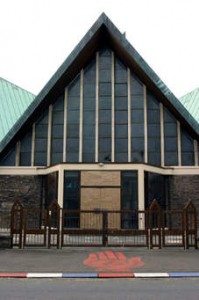 A Catholic Church which was the scene of weekly Saturday night loyalist protests is to be knocked down.

Our Lady’s Church in Harryville, Ballymena, has been closed since February last year.

The church said that the building, which was built in 1968 on land donated by a Protestant businessman, had been unsafe “for some time”.

Demonstrations outside the church took place in the 1990s.

They began in 1996 and were in response to nationalist objections to an Orange Order parade in the nearby village of Dunloy.

The protests eventually came to an end after the Good Friday Agreement of 1998.

A statement on behalf of the parish of Ballymena said that problems of water getting into the building had never been “fully resolved”.

“For some time now the building has been unsafe and had to be taken out of use in February 2012,” it said.

“Now, because of the damage to the roof and the building and the consequent risk of electrical failure, the cost of repair would be prohibitive.

“The costs, coupled with an assessment of the current needs of the parish community, has prompted the parish authorities to close the church on a permanent basis.

“This decision has naturally been taken with regret on account of the fond memories and strong attachments that we all naturally have to a church building.”