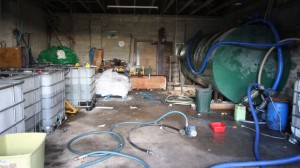 TWO men have been arrested and 1,000 litres of suspected laundered fuel has been seized during a planned raid.

A van and tank were taken away by HM Revenue and Customs and PSNI officers, as well as the suspicious diesel.

The men, aged 40 and 48, were interviewed by HMRC and have been released on bail.

John Whiting from the organisation said investigations will continue.

“The production of illicit fuels is organised fraud, robbing taxpayers of millions each year in unpaid duty and VAT, as well as the waste by-product damaging the environment,” he said.

“Anyone with information about the production, storage or sale of illicit fuel in their area should contact the Customs’ hotline on 0800 59 5000.”